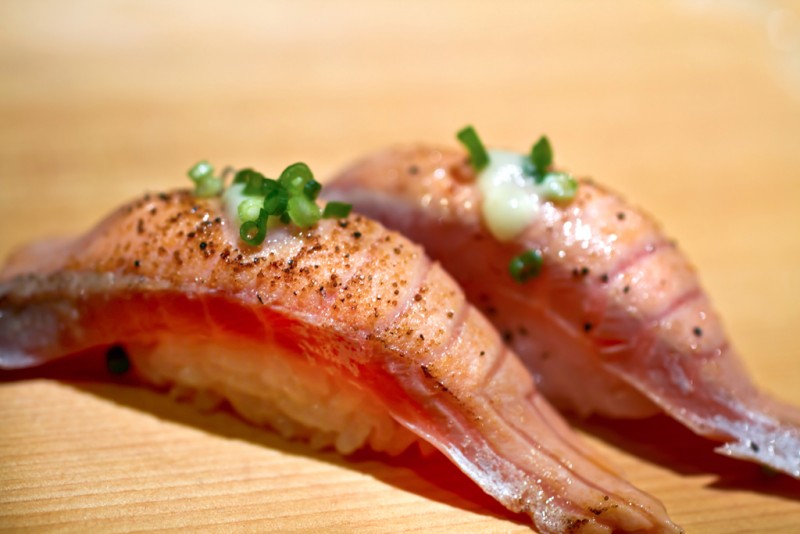 Welcome back to the Sushi Diaries. In Volume 1, we left off on the topic of Kawafuku -- the first sushi restaurant in America, opened in 1966. Their sushi menu consisted of more traditional Japanese nigiri sushi and sashimi, but in today’s America, the sushi you’ll find at Japanese restaurants can be deep fried, topped with pico de gallo, or even have fruit as an ingredient! But where did it all start?

It all started in the 1970s at a Los Angeles restaurant called Tokyo Kaikan with, you guessed it, the California Roll. The California Roll was actually created as a seasonal menu item, designed to replace a tuna and scallion maki roll when tuna was out of season, as tuna was a seasonal ingredient back then. To replace the fatty mouthfeel of the tuna came avocado, and crab provided a fishy flavor.

Although the California Roll was more American than Japanese, it initially was still served in maki-style: where the seaweed is on the outside of the rice and other ingredients. However, the maki-style was a bit too extreme for the average 1970s diner, which is what set off the trend of moving the seaweed paper to the inside of the rice. And while you can still find maki-style sushi on menus, having the rice on the outside is how most sushi rolls in American Japanese restaurants are typically served today.

That is to say, if the sushi roll even utilizes rice as an ingredient. I have seen many alternatives, such as rice paper, cucumber, or flour tortillas -- yes, I’m referring to the birth of the increasingly popular “Sushirrito.” As the name implies, this new creation is the child of sushi and a burrito, featuring rice, raw fish, and typical sushi ingredients, wrapped inside a flour tortilla with variations on guacamole and other Mexican flavors.

If the Sushirrito isn’t extreme enough for you, there are also Sushi Donuts: where the sushi rice is formed into the shape of a donut, and thin slices of fish, avocado, or ingredients of your choice are laid atop of it.

Clearly, sushi has come a long way since it traveled outside of Japan, and has evolved into many new shapes and forms, taking on influences from other cultures and cuisines around the world. We’ve talked a lot about sushi’s journey abroad, but what is the state of sushi like in Japan today? The answer awaits you in the next volume of the Sushi Diaries.                                           - Jacob - Washokujob Staff in America